With my vacation and my post-vacation week of rest unfortunately over, it is time to get back to the real world… It seems I didn’t miss all that much over the past few weeks, but that will all change tomorrow when the final comments on USF Reform are due! Anyway, I’ve tried to keep up with the news during this notoriously slow month but I haven’t found a whole lot worth writing about. Anyway, a fellow blogger/WISP provider over at Wireless Cowboys informed me about this study, Scoping Broadband Access in Illinois conducted by the Partnership for a Connected Illinois, which I did find rather interesting. However, I came to a much different conclusion than he did from the information in this report. He concluded that RLECs backed by USF have failed to deliver broadband in rural areas of Illinois while WISPs (without USF) have succeeded; I found no information to support this claim just from the statistics and maps provided in the report. Without spending a couple of days playing around with the Illinois state broadband mapping system, the only thing I can really conclude from this report is that broadband access and socio-economic benefits in rural areas go hand- in-hand, but one must exist in order for the other to succeed. It is basically the old “what came first, the chicken or the egg” situation.
I was reluctant to take this report seriously when I saw that it was conducted by Connected Illinois. I’ve lost faith in the Connected Nation mapping efforts after following the painful saga that some Iowa providers have experienced over the last 18 months just trying to get the simplest data updated in a timely (and correct) manner. I’ve completely dismissed the National Broadband Map as an accurate depiction of anything except wasteful government spending. I’ve read a few other studies that contradict statewide and national mapping efforts, and I honestly don’t think relying on providers to submit data on broadband speeds and availability is reliable. When that happens, you get entire states served with 3-6 Mbps by Verizon Wireless, when we all know fully well that this is not true. I also read some interesting comments in the USF proceeding submitted by Tribal carriers which describe their plight in sharing accurate broadband availability and speed information with mapping services. Basically, the provider-input methodology for mapping is not only a burden on small companies, but it opens the door for exaggerations and misunderstanding instructions and all kinds of inaccuracies. The geographic units are not always appropriately aligned with ISPs’ service boundaries, and in some cases if one house in a census block is served then the entire block is considered served. I could go on all day about my problems with the National and State broadband maps, but it won’t actually fix the problems. Unfortunately I don’t have a better solution for accurate mapping, other than relying on 3rd party speed tests and user-provided data, but I don’t trust consumers to provide accurate information either, especially when so many consumers can’t even say if they have DSL or cable Internet.
Anyway, I was reasonably satisfied with Connected Illinois’ methodology in this report—they used a 3-step verification process for the data, relying on the National Broadband Map and FCC data, Gadberry Company data (“user-sourced through a variety of methods”), and provider input, where the providers were “encouraged to submit comments, corrections and improvements.” The authors also noted honorably that “there may be errors in this information,” and there were occasional discrepancies between the measurements and the carrier input speeds. Furthermore, the authors made clear that “the public’s understanding and expectations of broadband capabilities continues to evolve,” which I think is a very important point. The purpose of this report was to create a snapshot of broadband speeds and availability in Illinois, and then rank the counties in the state. This can serve as a benchmark to track changes and progress: “Simply put, these early scores will serve as a baseline in assessing how broadband deployments change over time. [The Partnership for a Connected Illinois] aims to target how geographic broadband coverage changes over time and how these changes impact households, CAIs, and businesses across the state.”
The authors broke up broadband speeds into tiers, and I found the corresponding data to the speed tiers to be particularly interesting as an indicator that the definition of broadband is not 4 Mbps. Consider these statistics and corresponding map from the report: 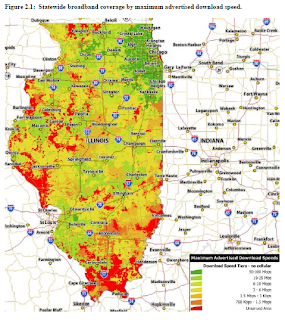 This data does not reflect subscription rates, nor does it include wireless or satellite “broadband,” but overall I felt like it does portray a fairly reasonable snapshot of the state’s broadband availability. Illinois, however, is not like most rural states—there is a major city in Illinois which contains most of the population and most of the fast broadband. So, although it is a real accomplishment that 65% of the state’s households have access to 50-100 Mbps; this is the 65% that live in high-density, urban and higher-income areas. This report makes note of this as well, and describes, “this baseline demonstrates that the most significant investment in broadband occurs in areas where population is most dense. Thus, the challenge for Illinois is to ensure that the investment in broadband becomes a priority throughout the entire State so that all citizens receive the benefits of broadband” (pg. 17).
I think this conclusion contradicts the National Broadband Plan’s recommendation of 4/1 Mbps for rural areas and 100 Mbps for urban areas, and it proves that there is indeed a serious rural-urban divide for broadband. I actually hope that this study will be cited in arguments against imposing different broadband speeds for urban and rural areas. The authors developed a ranking system for each county in Illinois, and it comes as no surprise that the most rural counties in the southern portion of the state fare much worse than the greater Chicago metro area. The top 10 counties, primarily in the Chicago area, see population densities from 70 to over 5000 people per square mile; whereas the bottom 10 counties have population densities ranging from 10-65 people per square mile (which is hardly rural by some standards): 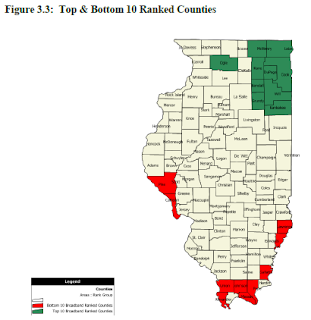 The report notes that “counties associated with larger populations, higher incomes, and greater numbers of businesses attract and get more broadband services. Likewise, smaller rural counties, with lower household income and less businesses do not attract as many broadband services.” The report lacks a breakdown of how many and which type of providers serve each county and the adoption rates (which is why I am skeptical of the Wireless Cowboys blog post concluding that only WISPs serve 1/3 of the state, therefore RLECs and USF has failed), but JSI Capital Advisor’s data from the 2011 Phone Lines book identifies 44 ILEC broadband providers ranging in size from AT&T with over 1.3m lines down to Bergen Telephone Company with 31 broadband lines.
Overall, I agreed with the authors that “It is most important to ask the question, does better broadband access drive…socio-economic factors or is it the better broadband access an effect of the socio-economic factors?”  Should a rural broadband provider invest millions of dollars into building 50 Mbps FTTH in a county with low population, no business growth, and an aging demographic with the hopes that it will revitalize the community, or does the broadband provider wait for the local economy to turn around on its own before making such an investment? I fear that the second option—waiting for local market forces to turn around—could result in death to both the community and the RLEC serving the community. Last week, President Obama visited several rural communities in Wisconsin, Iowa and Illinois, and he pledged to bring new jobs and economic growth to rural America—broadband plays a big role in this goal, obviously. The rural communities that are stuck in this limbo of slow/negative economic growth and no broadband access definitely need our attention right now, and hopefully the reformed USF will help address both the urban-rural and rural-rural broadband divides without creating even more challenges for rural broadband providers and consumers. Unfortunately, not many companies look at such areas as profitable markets for FTTH based on the idea that maybe one day in the future a large manufacturing plant or a Google server center or a new green energy corporation will establish itself in the area. However, new businesses will definitely look elsewhere if there is no chance of high-speed, high-capacity broadband. Thus describes the great rural broadband challenge—do you build first and then bring benefits to the community, or wait for a significant market demand? Like I said above, if you pick Option 2 you are likely to be waiting yourself into bankruptcy. Then again, if USF is reformed such that there are fewer opportunities for investment recovery and private capital, you might be in bankruptcy anyway even if you take a leap of faith on state-of-the-art rural broadband infrastructure.
Look for comment summaries on the USF Framework Public Notice both here and over at The ILEC Advisor starting in a few days!
Cassandra Heyne
ruraltelecommentary@gmail.com
Posted by Cassandra Heyne at 2:05 PM

Cassandra Heyne
I have been involved in rural telecommunications my entire life, and I am a dedicated advocate for small businesses and independent telecommunications providers. I currently live in Washington, DC and work as an analyst for JSI Capital Advisors.

Effective 9/26/11 regular posting on this blog has concluded. Thank you to all of my readers and supporters, please enjoy Rural TeleCommentary as a resource on rural telecom industry topics. I will continue to update USF Reform Headquarters with links to news on this important topic.